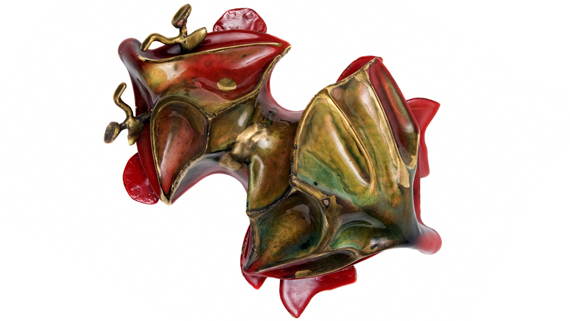 Just six months after the Swedish Film Institute was founded, its CEO Harry Schein announced a competition to design a film award to be presented to those who had made a strong contribution during the year. Exactly which artists took part in the competition is still wrapped in mystery, but Karl-Axel Pehrson (1921-2005), one of Sweden’s most famous artists at the time, was commissioned to design a film award.

The awards are named after the Swedish word for the rose chafer beetle. “The rose chafer likes to fly in the summer sunshine. It shimmers much like a film strip as it flies by. Something about its behaviour and its way of living can be likened to that of film.” This is how artist Karl Axel Pehrson explained why he chose a rose chafer beetle as his inspiration when designing the award.

A Guldbagge Award weighs approximately 1.2 kg and its body is chased in copper which is then enamelled. Finally, real gold is added to give the Guldbagge its characteristic shimmer.